I recently moved to south Palm Springs (Indian Canyons) and am fascinated by the geology of the area. It turns out that within about a 2 hour drive, one can see almost every type of geological process, including most types of faults, and almost every age of rock. All because of the unique collision of 3 continental plates in what is now Coachella Valley.

[N.B. Most of the information below is summarized, paraphrased or quoted from a superb book entitled “Roadside Geology of Southern California” by A.G. Sylvester and E. O’Black Gans. I highly recommend it to anyone finding this interesting.]

The Coachella Valley, stretching from Palm Springs to the Salton Sea (which is below sea level), sits on one of the youngest tectonic features in North America. The Valley straddles the North American (NA) and Pacific Plates, and sits on top of the remnants of a third subducted plate (the Farallon Plate). Much of the Southern California landscape is less than 1 million years old.

Some microplates broke off of the Farallon Plate and were captured by the Pacific plate, and it is on these captured microplates that our Coachella Valley now sits, on a geologic feature called the Salton Trough (which is the northern tip of the “Colorado Desert” physiographic province, named after the Colorado River, not the state). The Salton Trough is wedged in between the North American and Pacific plates.

The map below depicts these physiographic provinces — Palm Springs is at the NW tip of the little finger of Colorado Desert, up against the Peninsular Ranges at their easternmost  meeting with the Transverse Ranges).

[Physiographic provinces map is modified from the National Atlas, downloaded from http://geologycafe.com/california/maps/provinces_B&W2.htm ]

It was only 6 million years ago that the Pacific Plate finally captured everything west of the North American Plate. Because our valley still has remnants of the now-buried (or partly melted into the Earth’s core) Farallon plate, there are rocks and formations that are billions of years older than the rocks next door to them.

This recent collision of the Pacific plate generated many of our current features. It created the San Andreas Fault, which is the fault between the two plates. This fault was discovered in 1906 when it destroyed San Francisco.

The collision also created the Transverse Ranges, which run along the northern end of our valley and the LA Basin then out to the Channel Islands in the Pacific Ocean west of Santa Barbara (see map). This is one of only 6 mountain ranges in North America than run East to West — all the major ranges run north to south. In fact, the Transverse Ranges west of I-15 were running north-south until about 19 million years ago, when the Pacific-NA plate collision tore them away, and they rotated 110 degrees clockwise to their current orientation, at which time they were recaptured by the Pacific Plate.

The Transverse Ranges are still uplifting, and there is a “1-mile-high fault scarp on the southern front of the range. The destructive 1971 San Fernando and 1994 earthquakes caught seismologists off guard, because they did not yet understand and appreciate the tectonic setup of the Transverse Ranges and the role of the Pacific Plate grinding against the North American Plate.”

The San Andreas Fault starts at the Salton Sea (the large blue lake in the CO Desert in the map), and runs along the southern edge of the Transverse Ranges (the San Bernardino and Little San Bernardino Mountains), just north of I-10, through the Coachella Valley. The fault then crosses I-15 and the Transverse ranges in the Cajon pass and proceeds to run along the north edge of the Transverse Ranges along the San Gabriel Mountains, which are the northern border of the LA Basin and the southern border of Antelope Valley.

The San Andreas follows CA 138, just to its south, from I-15 to Palmdale in the Mojave Desert. It rejoins 138 and runs along 138 just before 138 merges into I-5, and then runs along Gorman Post Road and I-5 through the town of Gorman until it heads west of I-5 at Tejon pass. Soon after that, the San Andreas turns to the northwest (the turn is named the Big Bend), and heads up the Coast Ranges toward San Francisco.

Palm Springs is nestled up against the San Jacinto Mountains of the Peninsular Ranges, which were created on the Pacific Plate when it crashed into the NA Plate. In the following photo, the foreground mountains on the left are foothills of San Jacinto Peak and are on the Pacific Plate.  The mountains with snow in the distance are part of the Transverse Ranges on the North American Plate. The snow-capped peak is San Gorgonio Mountain, which is the highest peak in Southern California and the Transverse Ranges at 11,503 ft). Between them lie Palm Springs, Interstate 10, the San Andreas Fault, and over 2,000 windmills that produce enough power annually to meet the needs of all residences in the Coachella Valley. 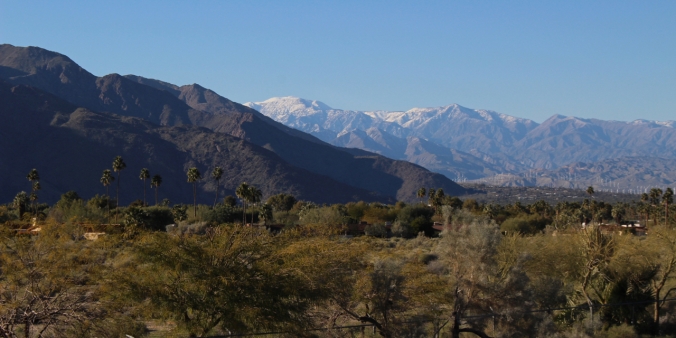 [Foreground mountains are on the Pacific Plate. Mountains in the distance are on the North American Plate. Taken from the levee of the wash in Indian Canyons. Photograph ©David E. Wilkins, 2019. ]

The San Jacinto Mountains surround Indian Canyons Golf Resort and are the northernmost range of the Peninsular Ranges that also cover Orange and San Diego counties, all the way to the southern tip of the Baja California Peninsula.

Immediately west of Palm Springs, San Jacinto Peak (10,834 ft) is the highest point in the Peninsular Ranges, the second highest peak in Southern California and home to the Palm Springs Aerial Tramway. San Jacinto Peak is one of the most topographically prominent peaks in the US and its north escarpment is one of the highest in the 48 contiguous states.

It is the San Jacinto Mountains that make our very young valley a “rain-shadow” desert, as they are high enough to prevent the maritime weather systems of the Pacific Ocean from getting to Palm Springs.

PS. The Pacific Plate (with LA and Palm Springs) is moving 2 inches per year north relative to the North American plate (with San Francisco and Palo Alto). A unique rock formation in the Pinnacles National Monument (a few miles south of Salinas/Monterey) is a perfect match for the same formation in the Mojave Desert, near the Transverse Ranges, showing the Pinnacle rocks have moved 190 miles toward San Francisco in the last 23 million years.